For many years, jojoba oil has been considered an elixir of sorts. This can be attributed to its panacea-like properties, especially in matters concerning the skin and the hair on our bodies. However, even though it is an essential component in a lot of cosmetic products, not many people understand what it is all about.

What is jojoba oil and where does it come from?

Jojoba oil is an extract from the jojoba plant, which is indigenous to North America. Areas like Southern California, Southern Arizona, and Northwestern Mexico is where the jojoba plant, known scientifically as the Simmondsia Chinensis plant, excels.

Considering the harsh climate in the areas that the jojoba plant calls home, it may be a bit surprising to find that the plant produces a nut that has a plethora of healing properties. It is through this very nut that we can extract the jojoba oil.

Why is it good for your hair?

The benefit jojoba oil has in your hair is a culmination of the properties the oil has. As the oil is a humectants ingredient, it seals the skin. This prevents the skin from losing moisture and getting bacterial infections. It also prevents acne and dandruff.

Jojoba oil also has powerful antibacterial properties, meaning that your hair won't have bacteria or fungi. The icing on this already delicious cake is that jojoba oil promotes the synthesis of collagen. Collagen is essential in making sure that the skin under your hair, and your skin in general, is in good condition.

Why would you use it in your beard?

Getting and maintaining a good beard is something of an onerous task if you don't have the tools to do so. With jojoba oil, things become much easier.

Additionally, the oil reduces the formation of sebum, a naturally occurring skin oil that makes it difficult for your beard to grow.

Can it help you grow your hair?

Of course, it can. One of the difficulties people with beards face is that at a certain stage, the beard stops growing. There is a myriad of reasons for this. Jojoba oil, being the magic bullet that is it, will make sure that you not only have a longer beard but that your beard is healthier and good-looking. 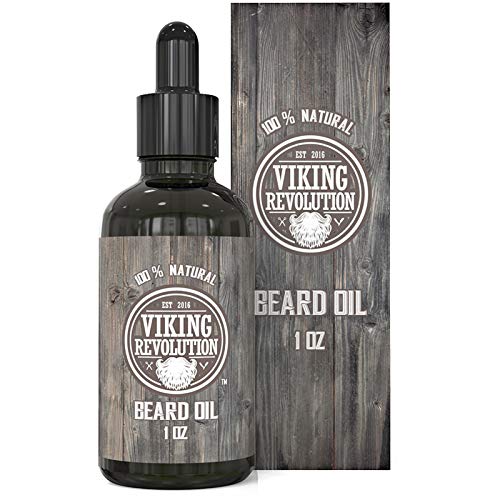 The market is proliferated with numerous cosmetic products that use jojoba oil, some of them better than others. It may become a bit trying to find the one that is best for you, and you don't want to experiment on your beard.

Viking Revolution Beard oil is the stuff of legend. It has been crafted to make sure that every single hair follicle in your beard is taken care of, making it more comfortable for you, since there isn't any itching or scratching sensation, and everyone around you will appreciate the masterpiece that is your beard.